Please rotate your phone back to portrait orientation for an optimum experience.

What is a Curb Chain? 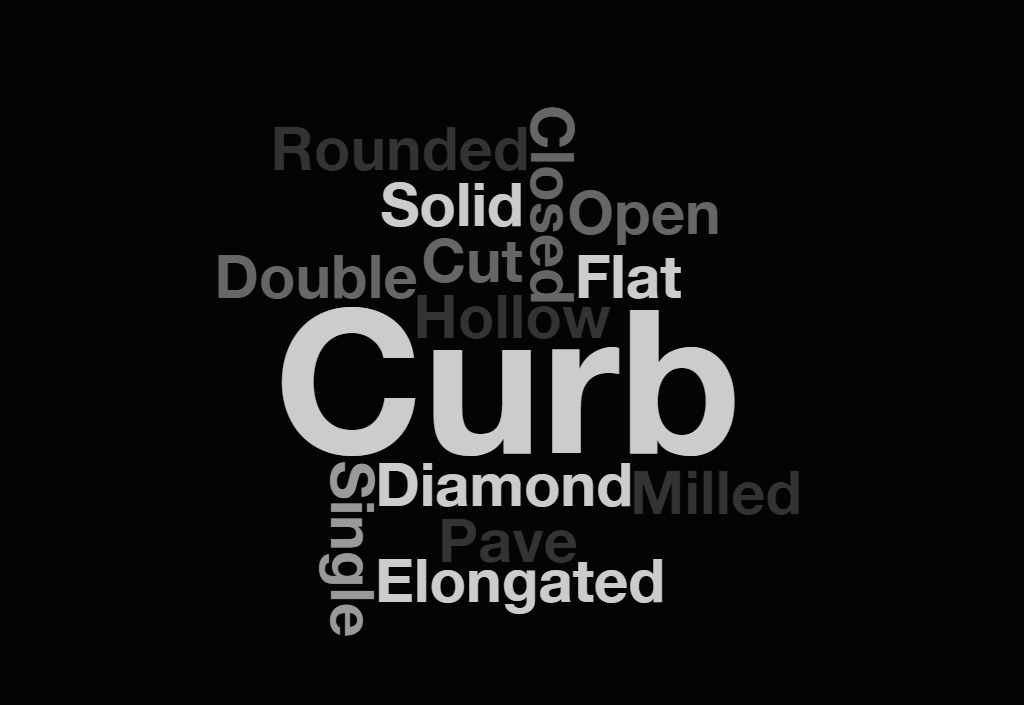 Classic styles of chain link have names that have long stuck around for decades and are instantly familiar, and the Curb Chain is a part of the classic chain styles group. Where Fashion trends are historic and standards the basis for much jewellery in Italy and France, the curb is known as Grumetta and a Gourmette Chain respectively.

How is a curb chain made?


Like most of the classic styles of Chain Link, which have originated hundreds of years before any of the state of the art technology existed, the Curb chain links were crafted from a round wire that was cut to size and then twisted to create a link shape with distinctive grooves. These grooves allow another curb link of the same width, length and depth to sit snuggly in this little pocket and the pairing process is then repeated with until the right length was produced. From this one base shape, creativity and evolving technology has resulted in several varieties of this Curb Chain Link style to meet the latest fashion trends, but at the heart of the Curb Chain, lies that distinct link shape with two grooves on each side, and the formation of one link paired with another.

What are the different types & styles of Curb Chain Links?


Before we look at differentiating between the varieties of Curb Chains, it’s important to mention that we’re comparing the structurally modified shapes in comparison with the original, base curb link shape that is at the heart of Curb Chains - namely, the twisted shape with two deep grooves.

To make it easier to understand the varieties, we’ve separated them by how their varieties is noticeable since often a Curb can be a combination of any of these styles together. For example, a Curb Chain can be available as an Open Curb, be Single, have Diamond Cut Link finishing and be Solid and we’ll show you as we explain further:

Rounded Curb
The Round or Rounded Curb Chain style is the starting point and the foundation of which the variations of Curb Chain Style are rooted because it has not yet had any special processes applied to the links. It’s named is based specifically on the rounded curves of the Curb links that form it. This variety does not have any visibly flat edges that you might see on Diamond cut Curbs, because there has been no Diamond Cutting procedure applied on the links- a process by which the curved edges are sliced equally with a precision tool to enhance the reflectiveness of the surface to produce a sparkling finish. Before the links are twisted into shape, they crafted from either a solid or hollow cylinder-shaped wire/tube and the rounded surface is already formed before any twisting has occurred.

Open Curb also known as an Elongated or Cheval Curb
The Open Curb Chain Links are noticeably different in their shape, though of course retaining the grooves at each end of the link. Whilst the width of the Curb Links that make this style is consistently the same from end to end, the individual length of the link has been slightly stretched and opened up. The effect is most bet described as looking at the Figaro Chain. In a Figaro Chain you’ll notice a pattern that is made from series of short links (the normal close link) and a then a longer link. This longer link is actually an Open Curb link, and the open curb link is made simply of these longer links throughout. It’s also known as a Cheval Link Chain, Cheval being the French word for Horse.

Close/Closed Curb
The most popular and recognised variety of Curb Chain, the appearance can be simply be described by taking a look at the Figaro Chain, which is formed from a combination of the Open Curb Links and Closed Curb Links. The Close Curb Links are those which sit together in a group of at least 3 and therefore are linked together nearer to each other. The vast majority of our Curb Chain collection are of this variety.

Other Examples of the Closed Curb you might see:

Concaved Curb
Essentially, shaped like a closed curb, the centre links of the Curb Chain have been concaved and from a bird’s eye view, inwardly forms groove the runs from end to end upon the surface of the chain.

Square Curb
A style of Closed Curb Chain, the Square Curb Chain glorifies the style of straight lines on the edges and on the surface. It has a boxy appearance, and is the opposite of the round curb chain featuring curves, and the characteristic groove itself is easy to notice. The surface prominently features triangular shapes on each side of the link.

Flat Curb
If you've ever wondered why you might see or hear a curb chain being described as a 'Flat Curb', the 'Flat' is usually referencing the overall depth of the chain links. If a chain is a 'Flat' style then it should be advertised clearly, since these styles of Chain are not as heavy as the standard curb chains. When layed out on a surface, the Flat Curb Chain compared with a non-flat Curb Chain will have less depth, even though it may posses the same wideness (or width). Whereas the Length is a measurement of the Chain when opened out flat, from the clasp end to the other end to which it fastens, and the Width is that narrower measurement when looking at a  birds eye view, the depth can be gauged properly when lying flat on a table at a side-profile view. Depending upon what style or feeling you're seeking, the benefits include: it can create the appearance of a wide chain from a birds eye view, be a lot lighter in weight and therefore generally cost less. The reverse of this is that, from side profile it may lack some chunkiness and overall weight.

Double Curb
Double Curb chain styles can vary in two ways. The first style is whereby two single curb links sit ontop of eachother and then link with another. The second is where there is a single link, but within that space two links on each side link fit inside that space.

Pave Curb
A style of Curb chain that utilises gemstones -synthetic or genuine. Depending upon the precious metal used to create the Curb chain links themselves, the stones are embedded within on the surface or the edges of the Curb link. Pave itself is a pattern of gemstone settings that refers to smaller stones being placed into the metal For Sterling Silver Curb Chains, in this rare Pave style, you’ll likely see the paired stones to be predominantly Cubic Zircon or synthetic stones. This is because the stones themselves are a lot cheaper, not being genuine gemstone, and therefore the end cost of the item being more affordable. This is compared with genuine more expensive gemstones such as Diamonds which will be paired with a more expensive White Gold, Platinum or Yellow Gold precious metal Curb Chain.

Milled Curb
The radiant and sparkling effect of Milled Curb is similar to that of a Pave Curb – on the surface it has the appearance that stones are set. But no gemstones are set within this chain. In fact this clever method, known as Milling, involves a Metal block with grooves, that are then rolled over the length of a chain and leave a pattern of imprints resulting in this low maintenance, worry free – sparkling appearance. The great benefit of this style, is that the wearer can wear this Curb Chain everyday, without worrying about stones being displaced if it accidentally sustains continual knocks- unlike a Pave Curb Chain.

Diamond Cut Curb
With this style of Curb Chain it’s first important to explain that Diamond Cutting itself is a specific process by which a surface is sliced ever so precisely to create a highly polished surface with a diamond-tipped tool. It’s applicable to almost any precious metal jewellery (and gemstones) so long as a surface exists. Whether it be Chains, Pendants, Bracelets, Earrings and more and with Curb Chains, specifically asking for a ‘Diamond Cut Curb Chain’ is still quite a broad request. This is because the Curb Chain link itself has a generous number of surfaces and edges of which are free to be ‘cut’ or ‘facetted’ on any section as per the creator’s choice. Should diamond cutting be applied to the surface of a Curb Chain, but not the edges, the end appearance created can be vastly different. For example, below is a Round Curb Chain with 2 Sides of the surface with Diamond Cutting. Where as another here has 4 sides diamond cutting, turning the originally Rounded Curb Chain with curved edges, straight edged.

Hollow Curb
The Hollow Curb Chain shape is that of the Rounded Curb, and therefore appearance wise there is no visible difference. The difference however lies within the actual formation of the link. The links of a Hollow Curb Chain or Bracelet will have started as a silver cylinder shaped tube, with hollow space inside that tube. That space inside is the hollow bit which can’t be seen, but only noticed when felt or weighed. These types of chains are popular when looking to save some money as it’s make up contains less silver, but still gives the appearance on the surface of a similar Solid Chain- and will feel naturally a lot more lighter. It’s also far more likely that you’d find Thicker chains being Hollow than fine chains, owing to it being physically impossible to achieve a hollow space in a fine wire. The potential drawback of the Hollow Curb variety is the overall longevity and durability of the links- since the hollow space inside means the link can be less fortified and overtime, (with silver being a softer precious metal by nature) it may break earlier than a solid Curb Chain. Additionally, if there is a breakage it’s far more difficult to repair owing the any solider not being able to form properly due to the hollow tube space. At The Chain Hut to ensure maximum durability and longevity all of our jewellery with Curb Chains and Curb Bracelets are solid and not Hollow.

Solid Curb
Solid Curb Chains will of course vary in their sizes, from fine, moderate, thick and thicker but unlike the hollow Curb, Solid Curb chains are crafted from a solid wire, without any vacant or ‘hollow’ space beneath the surface, creating better durability and longevity. The majority of fine Curb chains – those with a thinner appearance in their width- are very likely to be crafted from a solid wire, since it is physically difficult to produce a wire with such a narrow hollow space. As mentioned above, that hollow chains save silver weight making a thicker chain less expensive, but with finer chains in particular there makes little sense in doing the same since the overall metal spaced saved is quite minimal and would not saving much cost. At The Chain Hut all of our Chains from our Curb Chain Collection are Solid Curb Chains. 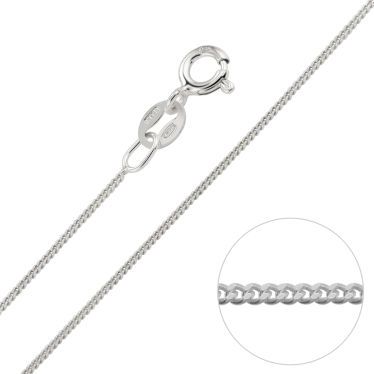 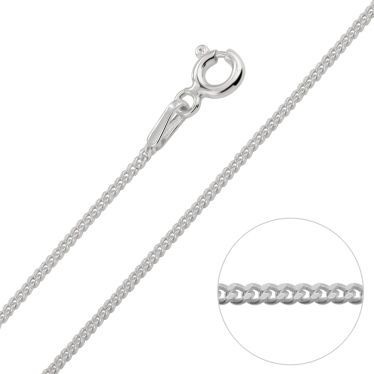 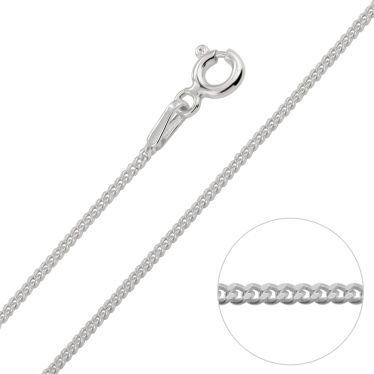 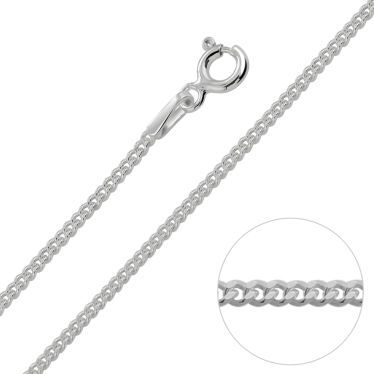 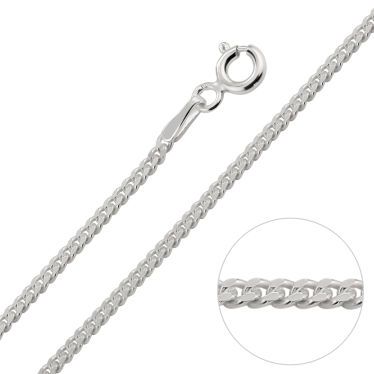 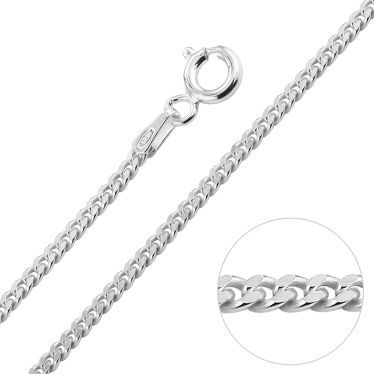 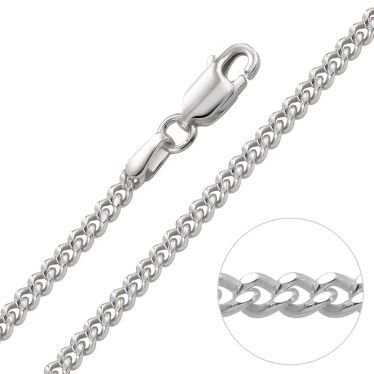 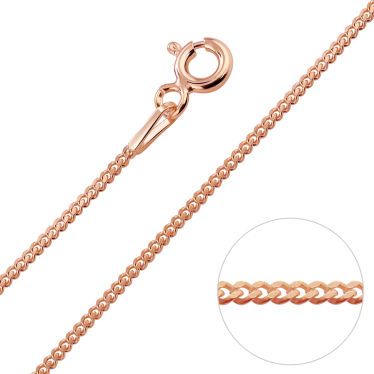 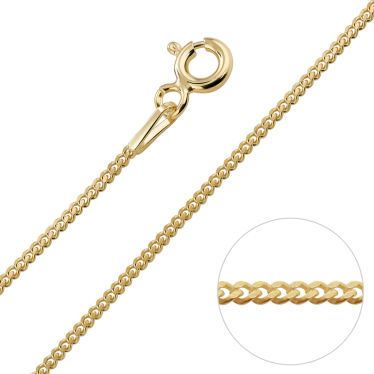 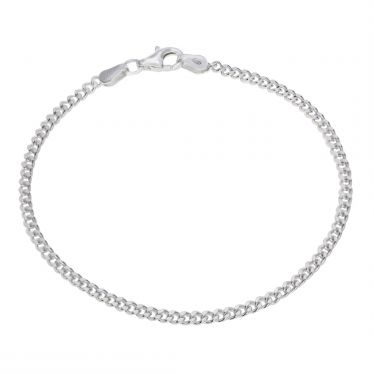 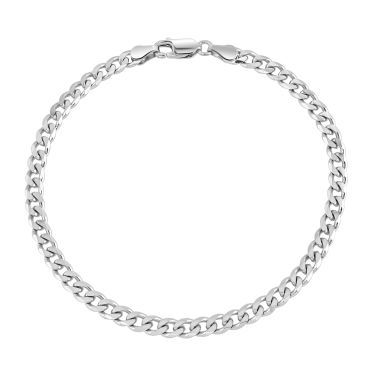 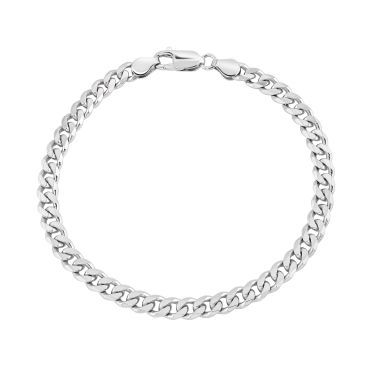 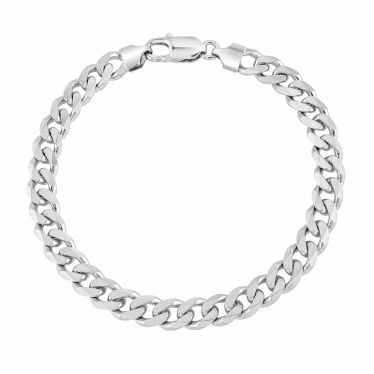 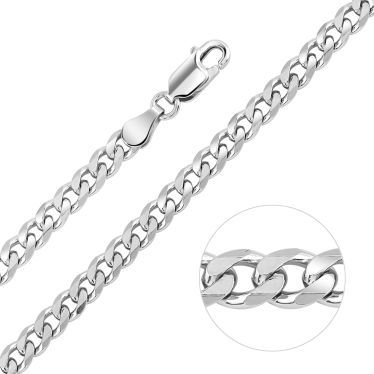 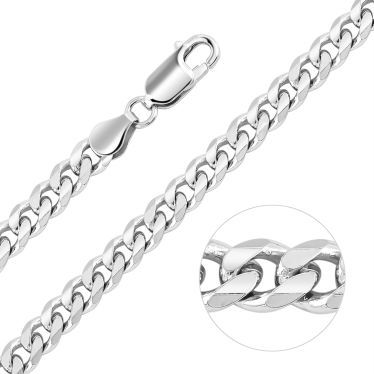 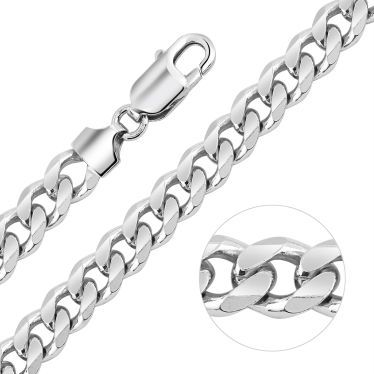